Earlier this week I took the stage before 450 executive women from leading brands and retailers. But the women weren’t there to see me. The attendees at this year’s Women in Retail Leadership Summit filled the ballroom to hear the keynote interview with none other than the queen of “pop” herself, PepsiCo’s Indra Nooyi. 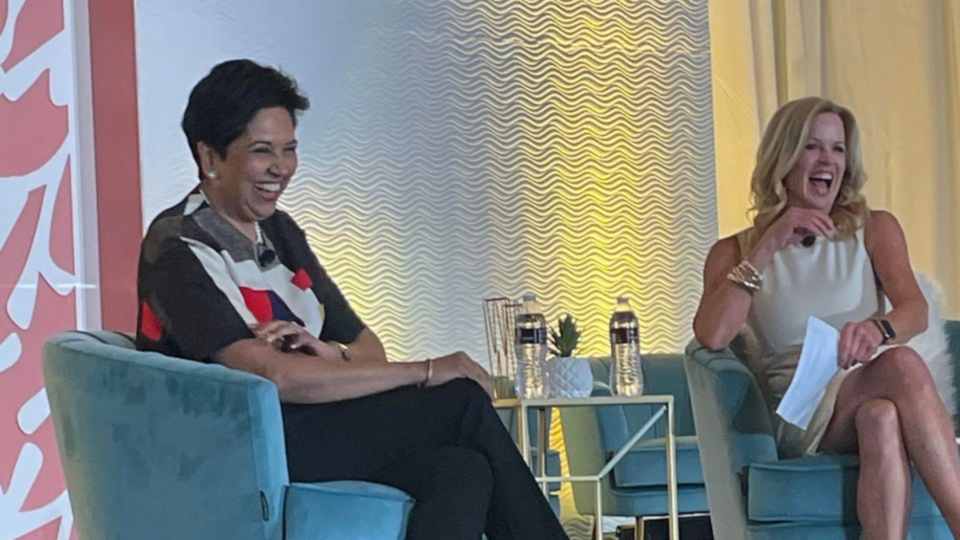 I had the privilege of talking with the company’s former Chairman and CEO to learn her secret sauce.

Nooyi shared her journey and her transformation from a quiet young girl in Madras India to a compassionate “dragon woman” in the boardroom. Here are a few of her top tips for becoming a successful leader:

Find and be a (wo)mentor. “Every mentor I’ve had over the years has said, ‘she’s not averse to getting her hands dirty,’” says Nooyi. She first met the chairman of her company as a 21-year-old woman sitting on the floor of her office organizing a product cabinet. Impressed with her work ethic, the mentor/mentee relationship evolved; when Nooyi was presented with two simultaneous opportunities – accept a raise and promotion at her current job or attend Yale, her mentor had Nooyi’s best interest at heart. “The chairman of the company I was working for basically said, ‘don’t [take the promotion], this is a dead-end kind of life. Spread your wings and fly.’” Nooyi says she is a product of mentorship. “Without all those mentors, I don’t think I’d be here today.”

Learn to bowl or find other ways to be “ultra-prepared”. When Nooyi was asked to give a keynote speech at a PepsiCo partner event, she thought it would be stupid to give a speech to the Bowling Proprietors Association if she’d never gone bowling. So, she and her team went bowling – every day for a week – and learned what life is like around a modern-day bowling alley. “Then when I spoke…I was credible as opposed to ‘I’m reading a speech that was prepared for me.’” Nooyi says the key is to be “ultra-prepared” for anything you do, otherwise you’ll just be one of the people in the room. “If you really want to stand out and contribute in massive ways, you’d better be really really prepared.”

Bring your whole self to work. “We tell people to come to work and leave your [personal life] outside the door. We want you to be ultra professional. Except anyone that comes to work is still a mother, a father, a son, a daughter, a brother, a sister. And all the issues you have at home, you can’t forget.” Nooyi says it’s important that leaders be compassionate and accept that employees have lives outside work. “It is not uncommon in meetings at PepsiCo that the first few minutes we talk about our families.” That doesn’t mean that work is not a priority, Nooyi cautions. “I think you can do both. I’m not this soft type that says forget the performance. Performance comes first because we have a company to run. At the same time, the way to get the best out of people is to acknowledge they have issues beyond the company.”

Remember, paid leave is a human issue, not a political one. Early in her career, Nooyi’s boss at Boston Consulting Group offered her six months paid leave to care for her terminally ill father. Nooyi also took paid leave when she gave birth to her two daughters and to recover from a car accident. “Every one of those paid leaves made me a better executive because I wanted to give my best to the company, and it built my allegiance to them.”

Thank your employees (and their parents!). When Nooyi became CEO, her mother in India invited friends and family to celebrate the news. Except instead of congratulating Nooyi, the guests showered praise on her mother! “So, I came back and I said all of my direct reports’ parents probably prayed and fasted and did all of that for their kids too, but nobody said thank you to them.” So, Nooyi embarked on an epic thank you note writing campaign to all of her direct reports’ parents (about 400 of them), thanking them for the gift of their son or daughter to PepsiCo and highlighting the contributions they were making to the company. The response was overwhelming and far reaching, with many parents overcome with emotion and many other CEOs reaching out for tips on how to write similar letters.

Make it personal. Nooyi identified certain mega trends that would affect her industry, such as a shift toward healthier eating and drinking habits. In fact, one child at her daughter’s birthday party wasn’t allowed to drink Pepsi! She told her team, “If we want to be successful in light of these mega trends, we have to change.” But she says getting buy-in to make changes is not easy, especially when things are going well. The best way to do it? Make it personal. “Every part of the transformation had to be framed in a story or an experience that they were facing.” She talked to her team about the eating and drinking habits of her executives and asked if they wanted their homes built on landfills full of plastics.

Focus on Performance with Purpose – Nooyi shared a story of a PepsiCo plant outside her hometown of Madras that was consuming massive amounts of water, while her own mother had to fill small buckets of water daily for washing, eating and cooking. “Here is a city that doesn’t have water, but the Pepsi plant is using 2.5 liters of water to make a liter of Pepsi – and that’s just not ok.” So, she tasked the plant with cutting down the water usage massively, from 2.5 liters to 1.2 liters, and figuring out a way to make the whole town better at water harvesting and building dams. It was a 2-pronged attack; inside the company, reduce water usage and then educate the town to collect, use and store water differently. “And that is Performance with Purpose,” she says, “because if we hadn’t done that, we’d have been shut down.”

Nooyi closed with a story of an employee who bravely told her she needed a new wardrobe. After a fancy personal shopping appointment, she had upped her clothing game significantly and was even told by a board member that she now looked “intimidating.” After spending an hour with this compassionate leader, I can assure you this was not a case of the clothes making the woman. This woman most definitely made the clothes.